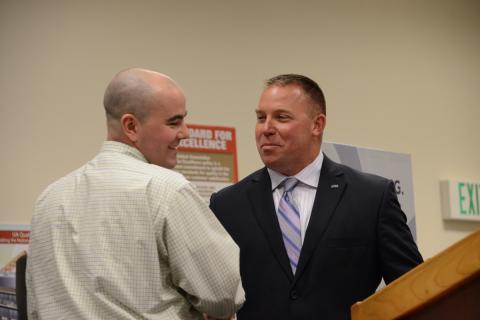 On Thursday, May 23, 2013, UA Local 26 and the Southwest Washington Pipe Trades were honored to host the graduation of the first Veterans In Piping Accelerated Welding program at Joint Base Lewis-McChord (JBLM). Fourteen graduates endured the 18-week program in which they welded for approximately 700 hours. The graduates are well prepared for a direct transition to their prospective local unions to become part of the UA’s nationally recognized apprenticeship program. The graduates’ families and friends were elated as the graduates took center stage for the ceremony.

UA General Secretary-Treasurer Mark McManus was on hand to offer a very warm welcome to the graduates. He led the charge for the graduates to pave the way for future VIPs. He stated, “In all my years, with all of the graduation ceremonies I have attended, this was by far the most humbling and gratifying one ever. Simply put, as General President Bill Hite states, ‘It is the right thing to do for the UA, for our returning heroes, and for our country.’”

UA Director of Training Chris Haslinger added, “We are extremely proud to be associated with Joint Base Lewis-McChord. It is truly an honor for us to be able to offer a career opportunity for servicemen and women who have bravely served our country.”

The Accelerated Welding VIP program was, at times, difficult for them all. The graduates commented on the support and outstanding instruction they received from Local 26 Business Manager Phillip Dines, Training Director David McMichael, Lead UA Welding Instructor Jay Clevenger, and UA Welding Instructor Michael Murphy. VIP Training Specialist Mike Hazard said, “The UA VIP program has grown into what it is today because of the contributions of this fine local and these great UA leaders.”

Brother Hazard also stated that the support and hard work put forth by Southwest Washington Pipe Trades’ staff member Elysha Peters, JBLM Army Continuing Education System (ACES) Program Manager Amy Moorash, ACES Education Specialist Nicole Reyes, and the entire staff of ACES, along with the host of others who collaborated on the program, made this program such a success.

The graduates were excited to be finished, and they were all looking forward to starting the next chapter in their lives. Some were getting on the road immediately following the ceremony.

Army Specialist Stanley Gates is headed to Local 100 in Dallas, TX. “There is supposed to be a lot of work there, and I have family close by,” he said. “I will have a place to stay and a place for my wife to have family near by. The local has been real friendly. I have spoken to them a few times. I have two kids, so the insurance and retirement will be great to have.” Brother Gates found out about the program through the Helmets to Hardhats program. He stated that he followed up very quickly because he always wanted to weld. He said, “I was still active for a month-and-a-half. The Chain of Command let me go because it was so close. The training was outstanding. I picked it up pretty quick. I now have four certifications. There is a lot of hands-on work. They let you weld a lot.”

Theresa Biesecker, the only woman in the class, is headed to Florida to Local 234 in Jacksonville. She took a slightly different path to get here. “I found out about the program in June of 2012, and I also found out about a program that allows military spouses to go to school for free. I took a course at a community college doing oxy-fuel welding—just to test the waters, to see if I liked it. I loved it, so I applied and got into the program. The instruction has been different—much more hands-on than I was used to. It is a pretty steep learning curve, and I didn’t pick it up right away. I’m still learning. This is one thing our instructors have been stressing to us. We are already ahead of the game by being in this program. We have spent 10 hours a day, four days a week in a booth under the hood. It’s empowering to have these skills, because you know wherever you go you will find work. If there is something that needs to be fixed, you can fix it. If there is something under construction, chances are there will be a job for you.”

Specialist William Northrop is optimistic about his young family’s future with the UA. He will be headed to Local 537 in Boston, MA. “When I was getting out, I also found out my wife and I were having a baby,” Brother Northrop said. “I heard about the program through the transition program in the Army. Welding was always appealing to me. I wanted to learn more. I knew it would be tough, but I was up for the challenge. I am heading to Boston. Originally, I wanted to go to the southeast, but work was not as abundant there. I am really excited to go to Boston as an apprentice. I am excited to learn from journeyman welders, to work alongside other welders. Long-term I am hoping to become a journeyman. I like to work on projects and perfect them. This job will create so much stability for my family. I have a newborn, and she will have health insurance right away. That is a big thing.”

Joint Base Lewis-McChord Commander, Colonel J. Charles Hodges, Jr., led the charge during the ceremony by giving the graduates their last mission. “Make us proud,” he said. “Be an example for all the VIPs. Continue to live the ethos and display the values of loyalty, duty, respect, selfless service, honor, integrity and personal courage—the way you have in uniform.

“I want you to remember your brothers and sisters who are still serving in uniform and those still yet to serve. I ask that because in your future travels you will have the opportunity to reach out and provide the same type of support you have received through this program. You can help another service member transition out of the military into civilian life.”

Brother Hazard added, “This was the first pilot program endorsed by the U.S. Army. With all of that said, what is really impressive is the strength in the partnership that has evolved between JBLM and the UA. There is a mutual admiration for each other. The UA went into JBLM making some big promises that were, quite frankly, hard for a lot of people in the military to believe. And we kept every single one. The UA VIP program really does place all of the graduates in an apprenticeship program with a real career path.”

It was evident that Colonel Hodges saw this program for what it truly is—an extraordinary opportunity for his soldiers. In a heartfelt statement, he said, “On behalf of the 47,000 service members who call JBLM a home, I would like to thank the United Association for your initiative in reaching out and supporting our transitioning service members. You have built a long-lasting relationship with JBLM—one that I revere. You recognized what we in uniform have known for a long time—that these young men and women represent the best that this country has to offer. Your willingness to put the time, money and resources into supporting their transition will not soon be forgotten. I can assure you that your efforts will be rewarded as these young people begin to serve in your ranks. They will serve you as well as they have served our nation.”

It is our honor to welcome them into the fold.