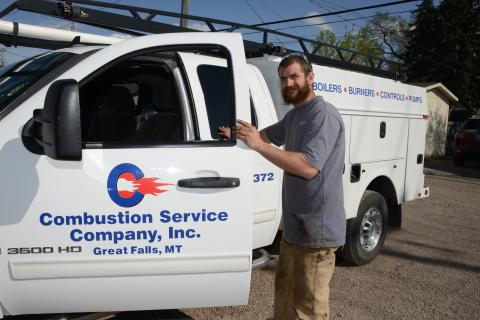 Joseph Miller was in the Marines for eight years and one month, from 2003 to 2011. He endured three deployments in four years and then became an instructor at the Marine Corps Mountain Warfare Training Center located 21 miles north of Bridgeport, CA.

Joe said, “We had a transition readiness program (TAPS) that I attended before I got out, and it was there that I found out about the Camp Pendleton VIP welding program, and I thought it was great. I started in January of 2011. You get what you put into the class. If you want to learn a whole bunch, you will. I had never welded before. I was a single dad. The idea of benefits and a job was really important. Once I separated from the Marines, there wasn’t going to be any health insurance. I just couldn’t go on to college and forget about my son.”

Joe completed the VIP program and continued his apprenticeship as a second-year apprentice with Plumbers and Pipefitters Local 230 in San Diego, CA. He was originally from San Diego, so the transition was seamless. “I met my wife in San Diego,” he said. “She was a buddy of mine from the military’s wife’s sister. She lived in Montana. For a whole year, I kept calling the old business manager of Local 41 in Butte, MT, to see if I could transfer to Butte. We both wanted to live there. A year went by, and I finally called up and said, ‘I’m headed up,’ and the current business manager, Sean Smith, got me a job two weeks after I got here. That would have been in May of 2012.”

“When I first came, I worked for a company called Corval Group and went to Conoco Phillips with Jacobs in Billings, about three-and-a-half hours from Great Falls, where we live now. I worked on the dam in Great Falls, worked for TriCounty, and then Dave Covert of Combustion Service Company was looking for a guy, and I went to apprenticeship school with his son, so I heard about it that way. So I’ve been working for him for two-and-a-half years now. We have a lot of work in town here with the public schools in Great Falls. My wife has a daughter, and I have a son, and we have a son together. It’s been great for my family.”

Combustion Service Company specializes in boiler installations and repairs and works on all the pump and piping within the boiler room itself. They install and maintain large commercial industrial boilers, all the way down to little teapot boilers that one would see in a jewelry store, Dave Covert, the owner, explained. “We do a lot of work at schools, apartments and hospitals, as well,” Dave said. “I needed someone who could weld and fit, and I spoke to Sean Smith, the business manager, who explained the program to me. We hired Joe and never looked back. He’s been here almost three years, and we have had a super apprentice here. He could do anything. He learns quickly, has a great attitude, and it doesn’t matter what kind of a hole we put him in—he is willing to get in and make it look good, and he does it right.”

He continued, “The VIP program was something I had never heard of, and when Joe stepped in here as a second-year apprentice and had all of those qualifications, I was very impressed that they had done a good job. The training he went through was very good. He didn’t know anything about boiler work when he got here, but he had all the basics about welding and fitting, and it’s just a matter of applying it to the job. I’ve been doing this for 42 years—my dad started it in 1971, and I took over in 1988—so I know what a good employee looks like, and he’s one of them.”

Now that Joe has recently turned out as a full-blown journeyman, he feels his training has really paid off. “I have a lot of friends who went to college who aren’t making any money,” he said. “When you look at your wages, compared to a four-year degree, once you hit journeyman, your wages are right there, and you don’t have any debt. I hate sitting. You are always doing something with this job. It’s not sitting at a desk looking at the same paperwork coming across your desk day after day. It’s something different each day. It’s just been perfect for me and my family.”