The show highlights union members as they hunt, fish and talk about their careers.

Rule, a graduate of the UA VIP Program at Joint Base Lewis-McChord and a current member of UA Local 393, has been an outdoorsman his entire life. In this episode, he recalls times when he was young and he used hunting as a motivation to keep his grades up. 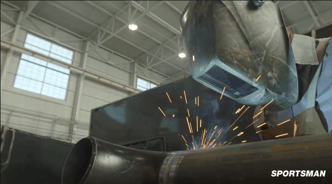 In the season premier, which aired on July 5, he heads from his home in near San Jose, Calif. to the wilderness of Saskatchewan, Canada to hunt white-fronted geese and ducks. As a waterfowl enthusiast, this was the hunt of a lifetime.

After completing four and half years in the active-duty Army and two-years in the National Guard, Rule found his skills did not match with a career in the civilian world. Then, he discovered the UA VIP Program, where he could learn a new skillset while completing his service.

Upon completion of the VIP Program and a successful transition out of the military, VIP graduates are placed with a UA signatory contractor in an agreed upon nationwide location.

In addition to job placement with a UA signatory contractor, VIP graduates gain direct entry into the five-year UA apprenticeship program. Here they learn from experienced journeymen on-the-job and in the classroom. When working, apprentices are paid a livable wage and earn great benefits such as family health insurance.

The VIP Program was a great career move for Rule, who now has joined his father, grandfather and great grandfather in the union pipe trades. Together, they have combined for 99 consecutive years of UA membership.

To learn more about the VIP Program at JBLM and six other installations, click here.