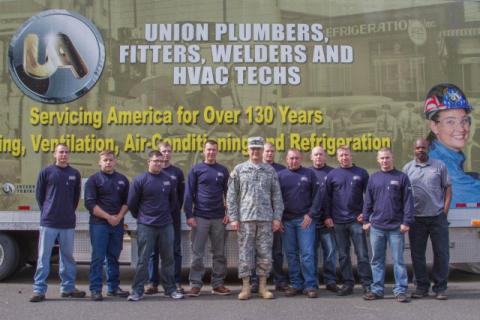 For years, Copeland has been told where to be, when to be there and what to wear. For this, he's received a steady paycheck, deposited into his account every two weeks. But as his career comes to a close, all that goes away. For Copeland and many like him, life on the outside can look a little frightening.

"You're thinking, 'I've got a mortgage. I've got kids. I've got a wife. I've got car payments, stuff like that," said Copeland, who's currently assigned to Headquarters and Headquarters Company, 3-2 Stryker Brigade Combat Team, at Joint Base Lewis-McChord. "It's definitely the scariest thing that anyone who's served can imagine doing when they're not set up already on the outside."

Copeland's local Army Career and Alumni Program coordinator says it doesn't have to be scary to leave the Army. Like ACAP centers throughout the Army, they offer many classes, seminars, and job fairs to help Soldiers who are leaving military service.

JBLM also serves as the site of the Army's pilot program to provide training and job placement for Soldiers with a number of local unions and businesses like United Associates and Microsoft. Chandler visited here to get a first-hand look at this new program.

"I was blown away by the things that are happening here at Joint Base Lewis-McChord when it comes to Soldiers transitioning back into society," said Chandler. "The trade unions and the partnership they've created with the Army is phenomenal."

Soldiers who complete their coursework are guaranteed a job, or at least a job interview, said Robin Baker, transition services manager for JBLM.

"We had an established relationship with the trades," said Baker. "They were struggling to get veterans to enroll in the training after they left active service because they lost their income and housing once they came off active duty."

What makes JBLM's transition program unique is it allows Soldiers to attend training starting up to 20 weeks prior to their separation from the Army, added Baker.

"There seems to be a spirit of looking at other ideas and trying to find solutions to solve problems. I haven't been to another installation that seems as aggressive in that as here at JBLM," said Chandler.

Some of the requirements for the program include command authorization, at least three years with a clean driving record, attaining required scores on the Armed Services Vocational Aptitude Battery and separating from the Army with an honorable or general discharge, among others.

The job training and placement program also serves as a safety net to catch Soldiers who prefer not to earn college degrees.

"I like to use my hands and construct. I like being able to go back and look at my work and know that I accomplished something," said Spc. Christopher Stoddart, a student at UA Local 26's welding training facility and armored crew member with 2nd Battalion, 1st Infantry Regiment, 2-2 SBCT, 7th ID.

"It's good to know [Chandler's] out there looking at programs like this for people getting out and looking after us," said Stoddart.

"It is one of the best experiences I've had in a long time as the sergeant major of the Army," said Chandler. "You see folks that are leaving, that are being recognized for their service, selected by their leadership and are now in an environment where they're basically guaranteed a place, their first choice, a living wage and the equipment that they need to be able to move forward into society."

"I wasn't going until they made me go, and, getting that [separation] letter, I was scared to death," said Sgt. 1st Class Christopher Cook, a VIP Heating, Ventilation, Air Conditioning and Refrigeration student and corrections specialist with 42nd Military Police Brigade. "I've been doing this 19 years, and I didn't plan on getting out, so I was absolutely terrified to go.

"A program like this is a lifesaver," Cook explained. "I don't have to worry about having a job when I get out. I just have to decide where I want to live."

This article appeared on the Official Homepage of the United States Army.