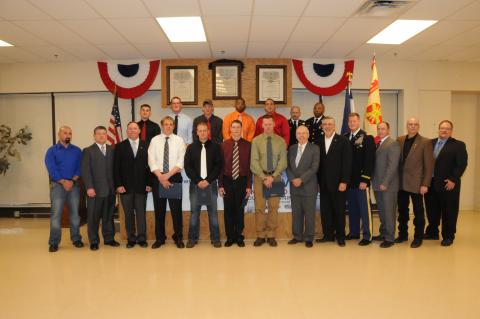 Fort Carson Garrison Commander Colonel David Grosso hit the nail on the head during the graduation ceremony on March 7, 2014, when he stated, “Our nation, as a whole, has embraced our service members who are returning from war. They admire the ethos. But admiration and actually stepping up to offer service members opportunity are two very different things. The UA stepped up and offered opportunity. That took commitment and an incredible investment by the UA—upwards of $25,000, as I understand it—because what they are offering is18 weeks of training and certification at no cost to our service members. The UA pays for it all. There are some great people in this program who have contributed a tremendous amount of time and effort to make sure this program succeeds.”

And succeed it has. The nine participants in the Fort Carson inaugural program graduated with qualifications required to make them successful on the job. Aaron Schultz, the UA’s lead welding instructor for the class, said, “I think these guys hit a home run. Eight out of nine have the UA 21 certification, one has 12 certifications, one has five, and one guy has four. Three of the participants have successfully obtained three certifications. But it’s not just about certifications. I tried to prepare them with the skills they will need to be most employable by UA contractors. They needed to know what a contractor is looking for. When there is downsizing on a job, you want to be the last to go. I tried to teach them what has made me successful in my career—it’s not always just about welding; it’s about attitude.”

Staff Sergeant (SSG) Mark Holbert joined the Army in August 2000. He was deployed four times—twice to Iraq, once to Afghanistan, and once in Cambodia. “I was a metal worker in the Army,” he said. “I knew I was going to go into welding, but I really didn’t have a clue what I was going to do. I had planned on doing 20 years, but was told I had to be medically retired. That was a sobering moment for me.” He continued, “The top-tier welders in the community are pipefitters. I wanted to join that community. It has been great. Four-and-a-half months of burning pipe, and then you have a job. I considered myself a pretty good stick welder, but I was humbled pretty quickly. Aaron (our instructor) said I would figure it out, and I have.”

Mark has attained 12 certifications through the program, an incredible feat for a UA journeyman, let alone an apprentice. He is headed to Plumbers and Pipefitters Local 469 in Phoenix, AZ, and they will be lucky to have him. Mark will be moving with his fiancée, Leighann, who will be continuing with her education in a Master’s program in the mental health field in AZ.

Specialist (SPC) Joshua Nordsving is headed to Local 6 in Rochester, MN, back home with his wife and new baby boy. Minnesota was his first choice for employment. His dad is a union member with the Operating Engineers who is often “on the road,” working alongside pipeliners from UA Local 798. He was excited that his son would be able to stay home for a while with his new family. Josh will be working in a fabrication facility, fabricating material for the new Vikings’ stadium and for a pipeline in CA.

“Transitioning has been easy for me because of this program,” said Josh. “When I joined the program, it took a little bit, maybe a week, for us to get to know one another. We could all relate in some way or another, especially being military. I imagine, jobwise, we will be able to relate to one another being journeymen too.”

Sergeant (SGT) Christopher Cygan has had a similar experience with the program. “I was very scared to get out. I have two kids and a wife with some medical issues. I couldn’t stress more to my wife, starting out a year ago, how the prospect of getting out of the Army was extremely stressful for me. I didn’t know what I was going to do or where we were going to live.”

Chris is going back home to Pittsburgh, PA. “I have always heard good things about unions,” he said. “Being from Pittsburgh, my grandfather was in a union, the steelworkers, and my uncle as well. I have always heard about the benefits. I knew I had to get into a union. My family was very excited and relieved when this opportunity came through. Once I got the acceptance letter, everyone was ecstatic.”

Major General Matthew Caulfield, USMC (Ret), has been a tireless longtime advocate for the VIP program. Addressing the graduates, he said, “It’s all about good jobs in our society, like you will get through this program. Business is not a charity. Business owners are in business to make a profit. To get good jobs, you have to have skills. Even if you have skills, you can’t get anywhere unless you know where those skills are needed. You have to be able to leverage those skills to an organization that needs them. That is not easy to do from Afghanistan. That’s called networking, and the UA has done that for you. So why are you the fortunate few? Because the UA has done that for you. Special Representative Joe Rohrer and Training Specialist Mike Hazard have done that for you. They have gotten you the jobs where you wanted to go, in the locals where you wanted to be. The leadership is waiting for you on the other end. It’s a tremendous opportunity. Now it’s just up to you to see it through.”

Plumbers and Pipefitters Local 58 Business Manager Ron Lenz and Training Director Dave Porter see the relationship between the UA and Fort Carson as a perfect fit and are looking forward to running this ongoing program. Training Director Porter said, “This is a good investment for the UA. The soldiers coming out of the military have the intangible qualities that we are looking for—dedication, hardworking, pride, competitiveness, and a willingness to work in all kinds of elements and to follow directions. These qualities are not easy to find in this day and age.”

The military is rightfully proud of its transitioning service members, and so are we. As Fort Carson Garrison Command Sergeant Major Steven Green, stated, “Thanks for giving these soldiers the opportunity to show you how good they really are.”