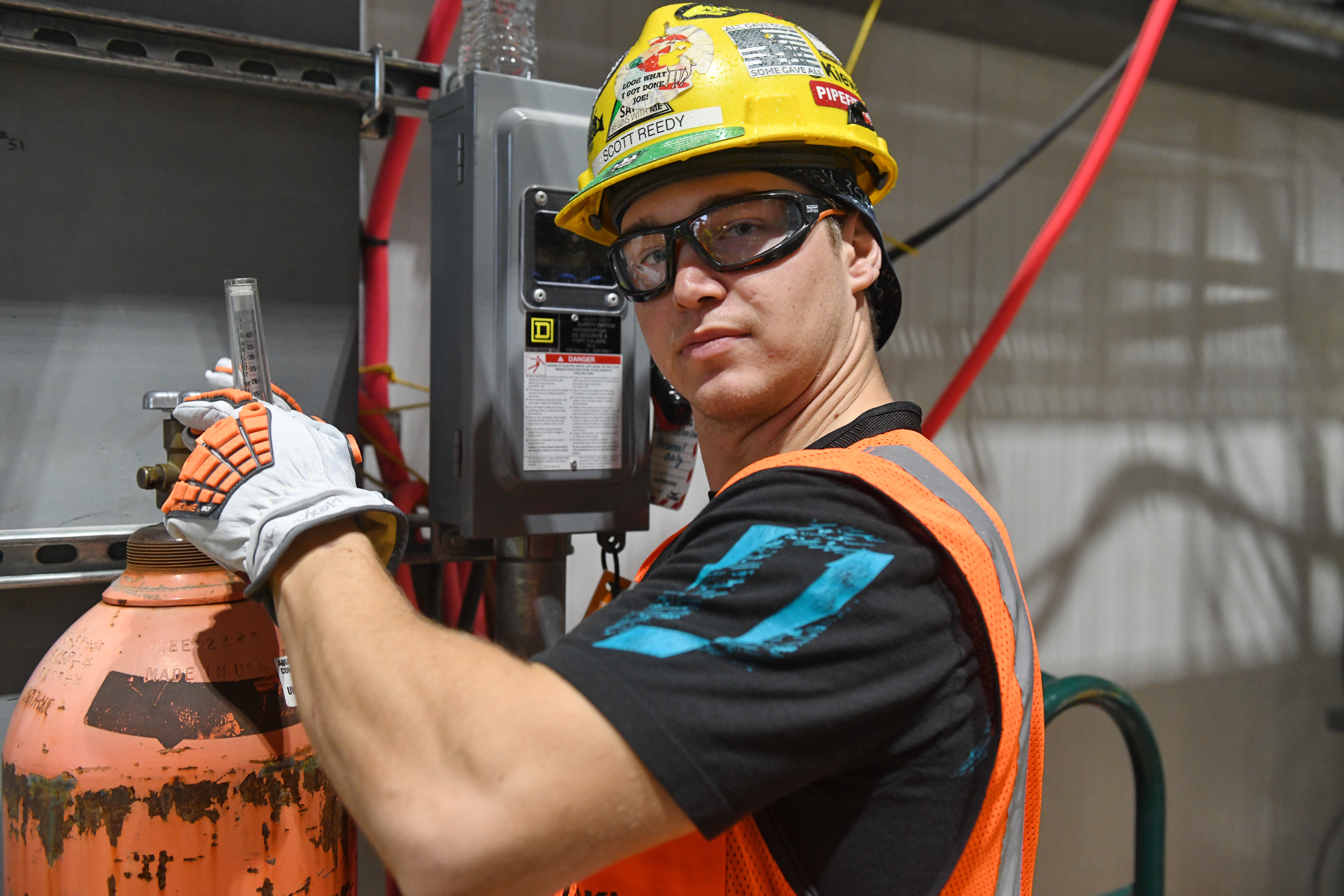 Third-year Plumbers and Pipefitters Local 354, Latrobe, PA, apprentice Scott Reedy spent seven years in the Marine Corps. His first two years were spent stationed in Okinawa, Japan, and his last four years were spent stationed in North Carolina. Scott always knew he wanted to join the Marines because both of his grandparents served in the Vietnam War.

“In Okinawa, I was strictly a field radio operator,” Scott said. “When I came back to North Carolina, I was still a field radio operator, but I got attached to RECON and deployed with them. After that, I got away from that job and started handling COMSEC material. I worked in a vault every day, which I didn’t like because I was secluded. Then, I was a Platoon Sergeant in charge of 100 guys, making sure they were trained and doing what they were supposed to be doing.”     Scott’s second deployment was an MEU deployment. He spent six months on a ship in the Pacific Ocean. He said, “My second deployment, we were busy dropping bombs, and as far as that goes, every day is like Groundhog Day. We got to port three times, but still, waking up and doing the same thing every single day is tough.”

Scott went through the VIP program at Camp Lejeune and is grateful for it. “I always thought I was going to be a power lineman,” he said. “College was never going to be the route I was going to take. I always wanted to work with my hands. I enjoy it, and I like seeing the out-come of the work we do.” Scott is also grateful to the UA for where he is now. He said, “As far as my transition getting out, they made it seamless. I’ve never gone without a paycheck. When I got out of the Marine Corps, I took 70 days of vacation, and then I started working right away, so that was awesome. They took good care of me—I started as a second year instead of a first year. They made sure I was working, and I was able to get a welding certification and become OSHA 30 certified, which set me up ahead of my class.”

After completing the program, Scott figured he would join Steamfitters Local 449 in Pitts-burgh, PA, until he found out there was a UA local near his hometown. He said, “I grew up in Greensburg, PA, but I didn’t know about Local 354. I called a buddy, because I thought he was in Local 449. I asked him how work was and how he liked driving to Pittsburgh. He told me, ‘I don’t work in Pittsburgh, I work for Local 354.’ I had already told my instructors I was going to Local 449, but I looked into Local 354 anyway and called the training coordinator and talked to him. I’m glad I joined Local 354, because the school is five minutes away from where I live, and all the work is close.”

Scott is currently pipefitting for a welder at the Hill Top Energy Center in Carmichaels, PA, working for Kiewit. He has been working at Hill Top for a year, and it is his second long-term job since beginning his apprenticeship. Scott hopes to one day move to North Carolina and become a welding instructor for the same VIP program he went through at Camp Lejeune. “I want to finish my time, get my book, and earn some more weld certifications,” he said. “Then, I want to go back to North Carolina and teach welding for the Veterans in Piping program.

This United Association Veterans In Piping Success Story was originally printed in the CareerOps: Career Opportunities in Piping for Transitioning Veterans Spring/Summer 2021 edition.