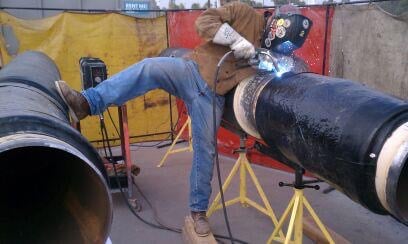 The lead United Association Veterans in Piping (UA VIP) Program welding instructor at Camp Pendleton can look his students in the eye and tell them he has been in their shoes.

Marine Corporal Sean Ellis, like many other UA VIP graduates, is thankful for the opportunity the VIP Program provided him. Upon completion of the program, Ellis went to work at a UA signatory contractor following his successful transition out of the armed forces.

His transition out of the military and back into civilian life was smooth, Ellis noted that the culture in the construction industry is similar in the military.

“The culture in the construction industry is very similar to military culture, this helped alleviate some of the pressure when it came to returning back to civilian life,” he said.

The path Ellis took after topping out as a journeyman is one less traveled by VIP graduates.

He gained journeyman status in 2014, and worked in the field on a number of diverse jobs for his Local’s signatory contractors.

“I worked on everything from hospitals to highrise hotels, co-generation plants, central plants and everything in between,” Ellis said, who also credited the UA VIP Program for preparing him for his career with the UA.

Ellis attested that his favorite part of being a member of the UA is seeing a project from beginning to end.

“To me, there is no better feeling than seeing a project go up, such as a hospital and know that you played a part in that,” he said.

Unlike most journeymen though, Ellis felt something was missing. 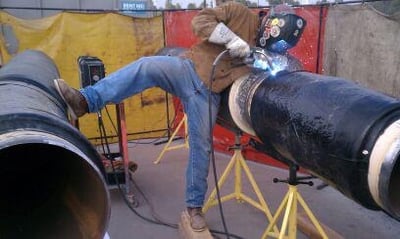 Ultimately, he found what was missing; his life at Camp Pendleton. Ellis was stationed at Camp Pendleton when he took part in the Veterans in Piping Program, where he now resides as a UA VIP instructor.

As a welding instructor, Ellis expects his students to work hard and be engaged, but he expects this of anyone who applies to the UA VIP Program.

“I would tell any service members who are interested in the UA VIP Program to be ready to work hard,” Ellis said.

The hard work put in by program participants pays off though, as UA VIP graduates are guaranteed a job with a UA signatory contractor in an agreed upon location nationwide, and direct entry into the UA’s five-year registered apprenticeship program.

This was one of the many factors that drew Ellis to the program.

“The quality wages and benefits that come with the union took a lot of the stress off my family and I,” he said.

Skilled welders are in high demand. The UA VIP program provides a great opportunity for transitioning active-duty military service members to learn a skill they can take with them and apply it to life after the service to provide for themselves and their family.