Catching Up With Brian Kirby, A UA VIP Graduate 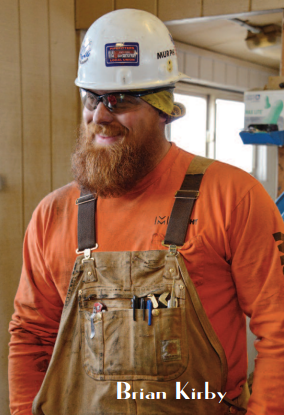 After serving his country for 13 years in the United States Army, Brian Kirby was ready to transition to civilian life and decided the best way to prepare for his future outside of the Armed Services was with the United Association (UA) Veterans in Piping (VIP) Program.

With the United Association (UA) Veterans in Piping (VIP) Program, transitioning military members prepare to leave the service with sought after skills that can lead to lifelong careers in the increasingly in-demand pipe trades. Through 18-week accelerated courses – provided free of cost on military bases across the country – UA VIP participants earn industry-recognized certifications and direct entry into stable private-sector jobs with good pay and benefits. Department of Defense funds are not required to make this program work; the UA International Training Fund pays for the education and trains the departing service members. Additionally, 100 percent of the men and women who graduate from the UA VIP Program are placed into a 5-year apprenticeship program with the UA where they train for a career, not just a job.

Kirby says he greatly enjoys the versatility available to him in his career.  “I just got out into the field a few months ago.  For a year and some change, I was working in a fabrication shop. I was pipefitting for a while, and then I went to welding, since I had welding certifications from the VIP program. So I welded in the shop for six to eight months before I was sent out to the field. Since I’ve been out in the field, I’ve been doing a bit of everything. I tore down a cooling tower and set a new one, worked over at Woodward putting in air and chilled water lines, and then I went to another project, and we changed a tank in there. I also helped build some hangars for piping for the same project. I like working in the field because it’s something different every day. Even if it’s on the same project, it’s something different each day. It’s never dull.” 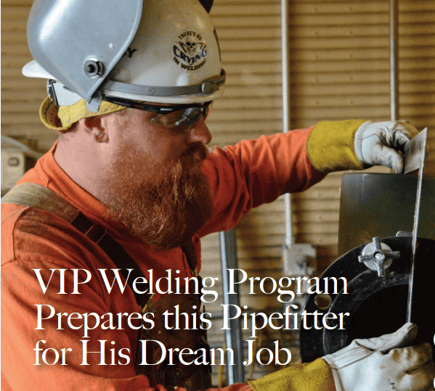 There’s great potential for career growth for the men and women who participate in the UA VIP Program.  Kirby says, although he had a lot to learn once he entered his formal apprenticeship, he felt well equipped.  “I felt really prepared when I stepped into the fabrication shop, and with the welding I had to do there, but I won’t lie, I had a lot to learn once I got out into the field. There’s a reason it’s a five-year apprenticeship program. I felt ahead of my peers in welding, but I had a lot to learn from journeymen—like general system knowledge, layout knowledge, having the ability to just look at something and knowing intuitively what we had to do to fix it, that sort of thing. I’ve been really lucky, and I’ve worked with some great journeymen, and I’m catching up on the other stuff quickly! In the Army I was in charge of 42 guys. I sat behind a desk. I love what I do with the UA. I’m happier now than I’ve been in 14 years. I don’t get called at crazy hours to retrieve some guy who did something stupid. I’m with these great guys at work, and then I get to go home to my wife and kids—that’s what is so great.”

In addition to the career growth, the benefits available to the members of the United Association upon completion of the UA VIP Program are fantastic.  “The UA picked up my retirement. I was in the military for 13 years, so I won’t get retirement there. Local 208 has an additional annuity that I can put up to $6.00 per hour in if I want, in addition to the UA retirement, and that’s going to make up what I lost by not staying in the military. My family’s health care was picked right up, and I’m not paying out of pocket—it’s part of the package. Being a second-year apprentice, I’m making more money than I did after 13 years in the Army, and it’s only going to get better. It’s made a huge impact on my lifestyle. I have a nice house, my truck’s paid for, my wife’s car is paid off and I live comfortably. I do not want for anything and it’s only going to get better.”

We wish Brian Kirby continued success in his career with the United Association.