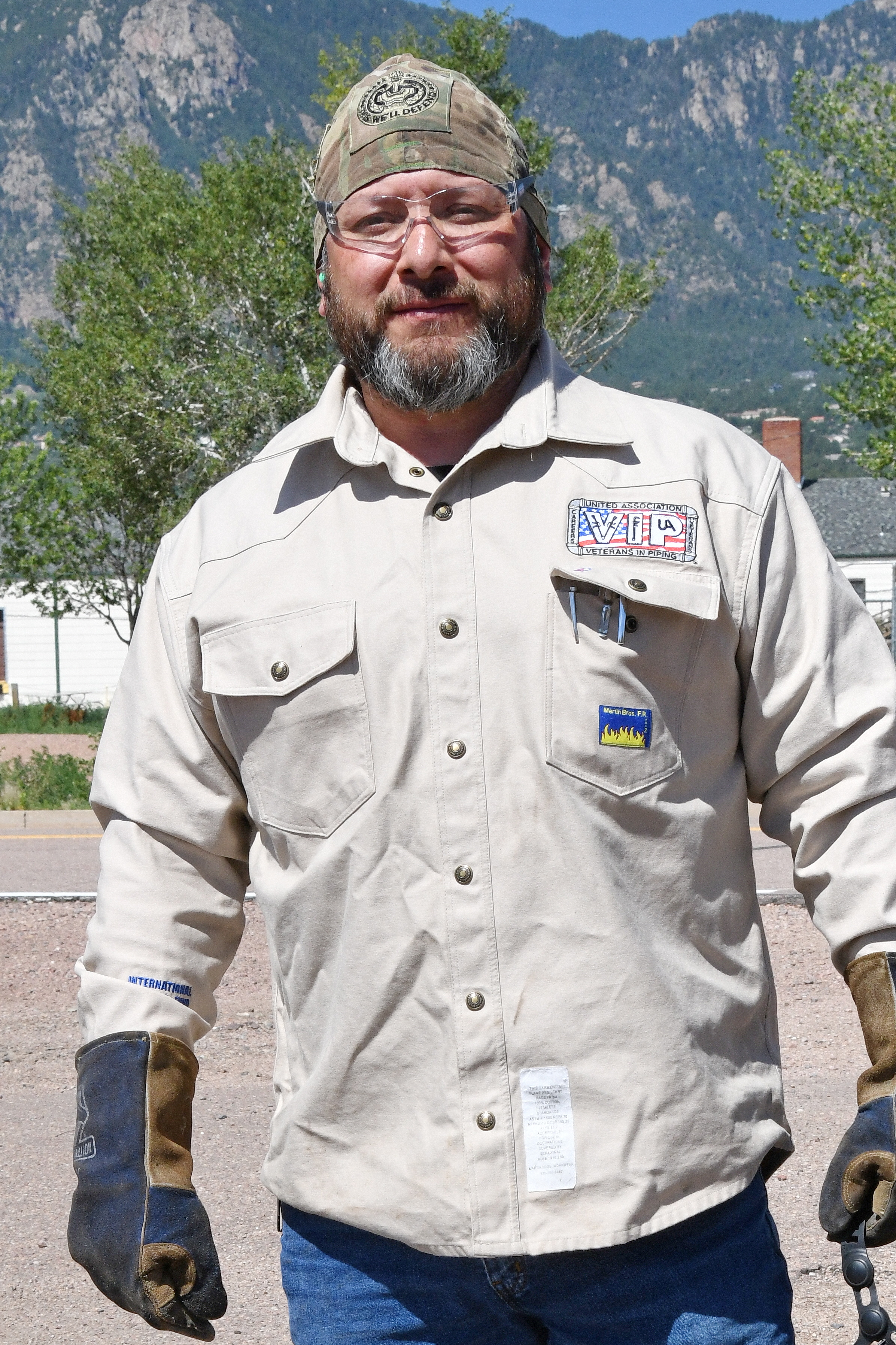 Suppose you’re lucky enough to be chosen for the Fort Carson Veterans in Piping (VIP) welding program. In that case, you will have the unique opportunity to be taught by one of your brothers, Jose Ballejo, who, at the time of his acceptance into the VIP program, had served in the Army for 22 years. 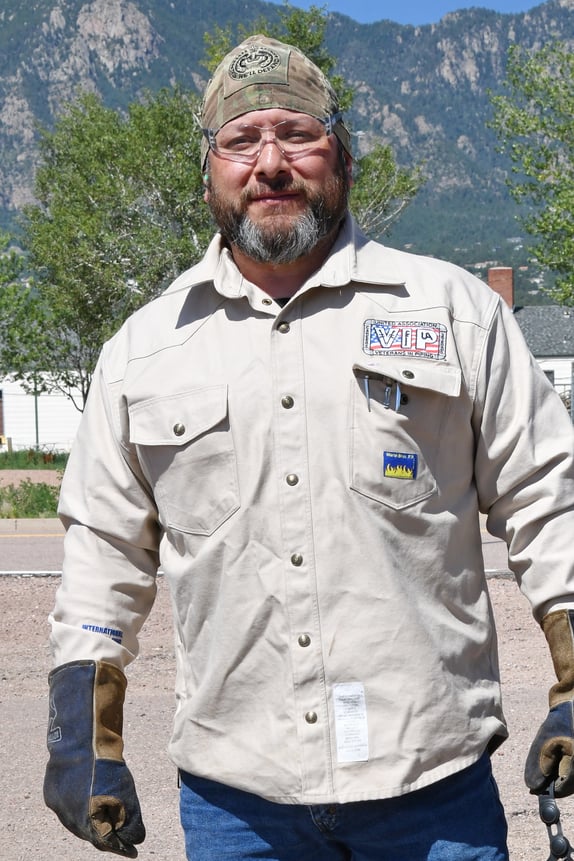 Ballejo grew up in Hereford, a smalltown in Texas, which he noted is often called the beef capital of the world. In the summers, he would work in the fields, following the trucks clipping onions. After that, Ballejo and his brother worked in family restaurants. He played football in high school and always gravitated toward anything physical.

Ballejo had always been drawn to the military and joined the Army at 17. He began his military career in the National Guard, stating, “I was a delayed entry. The summer before my senior year, my mom signed the papers so that, in 1994, I could join three days after graduation. I headed to Fort Benning in Georgia. I started in June, and once I finished basic AIT (Advanced Individual Training), I knew I wanted to do this forever.”

Ballejo said after a soldier graduates basic and AIT, soldiers going into the National Guard must wait six months before they can go on active duty. When Ballejo was eligible, the Army put a hiring freeze on anyone with prior service, so he ended up waiting two years before joining.

Within those two years, Ballejo got married and became a father to two sons. His first duty station was at Fort Lewis, WA, as part of the 1st Battalion, 5th Infantry Regiment (1-5 IN B CO). He remembered going through Basic Training and thinking he just wanted to go home. A single mom had raised him; it was always just Ballejo, his brother, and their mom.

Ballejo said, “My mom said, ‘Hey, you said you would do this. You have to fulfill your obligation.’” The Army sent him to Korea, and his family moved back to Texas. After one year, Ballejo went back to Fort Lewis, WA. He was in Fort Lewis when 9/11 happened. “It was a bad time for America, for most infantrymen. We knew it would be the ultimate test for us—many of my friends who were supposed to get out stayed on. The whole world changed on that day,” he stated. 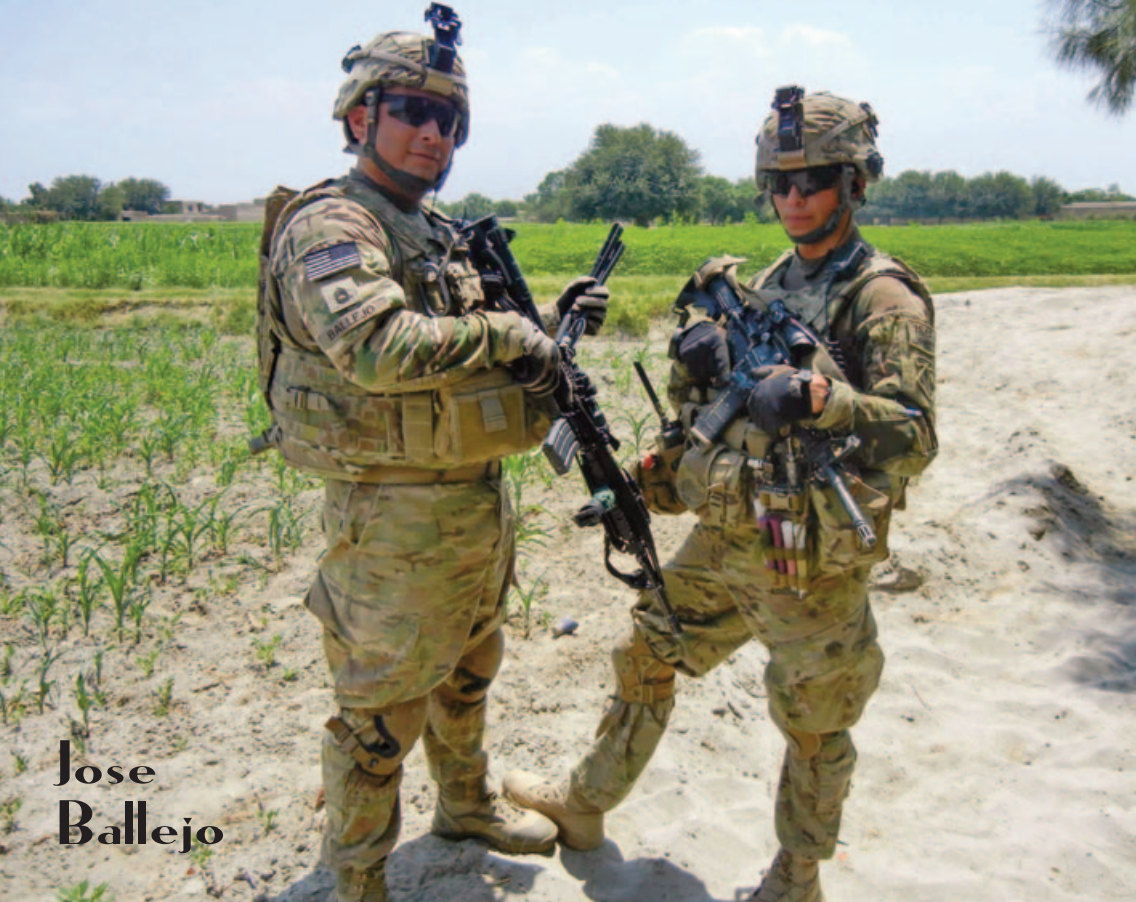 Ballejo said, “I received orders for Alaska, and I was there from 2001 until 2007. I made Staff Sergeant there and I deployed to Iraq, and we ended up getting extended. We lost one of our brothers on that extension, which sucked because we weren’t even supposed to be there. It hit us all hard. Jonathon was someone we hung out with all the time. He was the fifth one out of our Battalion who we lost.

“After Iraq, I went back to Fort Benning. I knew I was different. Everybody is different when you come back from a deployment like that. It was a crazy time for the military. They didn’t know how to handle guys who came back with issues, and I say by the grace of God, I felt OK. But when I look back, I know I had issues too. It’s different now for the VIPs. As VIP instructors, we completed training with Dr. Sally Spencer-Thomas called The Member Assistance Program (MAP), which made me aware of a lot. Even though we are trained in the military to handle difficult situations, many of us bury our thoughts. In the end, we are just human beings. There is no way that you’re not affected by situations we experience.”

Ballejo feels he has become a better listener through the training the VIP program offers its instructors. He stated he is more understanding and has recognized the triggers that caused him to relive some experiences.

Ballejo noted that it is consistently the brotherhood and sisterhood that is so strong in the United Association that provides the support many veterans seek. “In the military, you have a strong purpose,” he said, “which is to defend this country. As apprentices and journeymen and women, we also have a purpose—we’re building America.”

After Fort Benning, Ballejo went to Fort Carson, where he heard about the Veterans in Piping (VIP) program. He had already put in his retirement package. Ballejo got his paperwork signed and scheduled for an interview for the program.

He recalled, “There were four guys in suits interviewing me. I had not had time to prepare a resume, and I’m thinking, ‘I am never going to get this,’ and then I found out I got in, and I swear, I felt it was meant to be.”

Ballejo added, “I think the VIP program is a tremendous transition for soldiers. It helps you get started in the civilian world. I retired in 2016, and I still have strong military tendencies. I see eye-to-eye with soldiers because they know where I’m coming from. 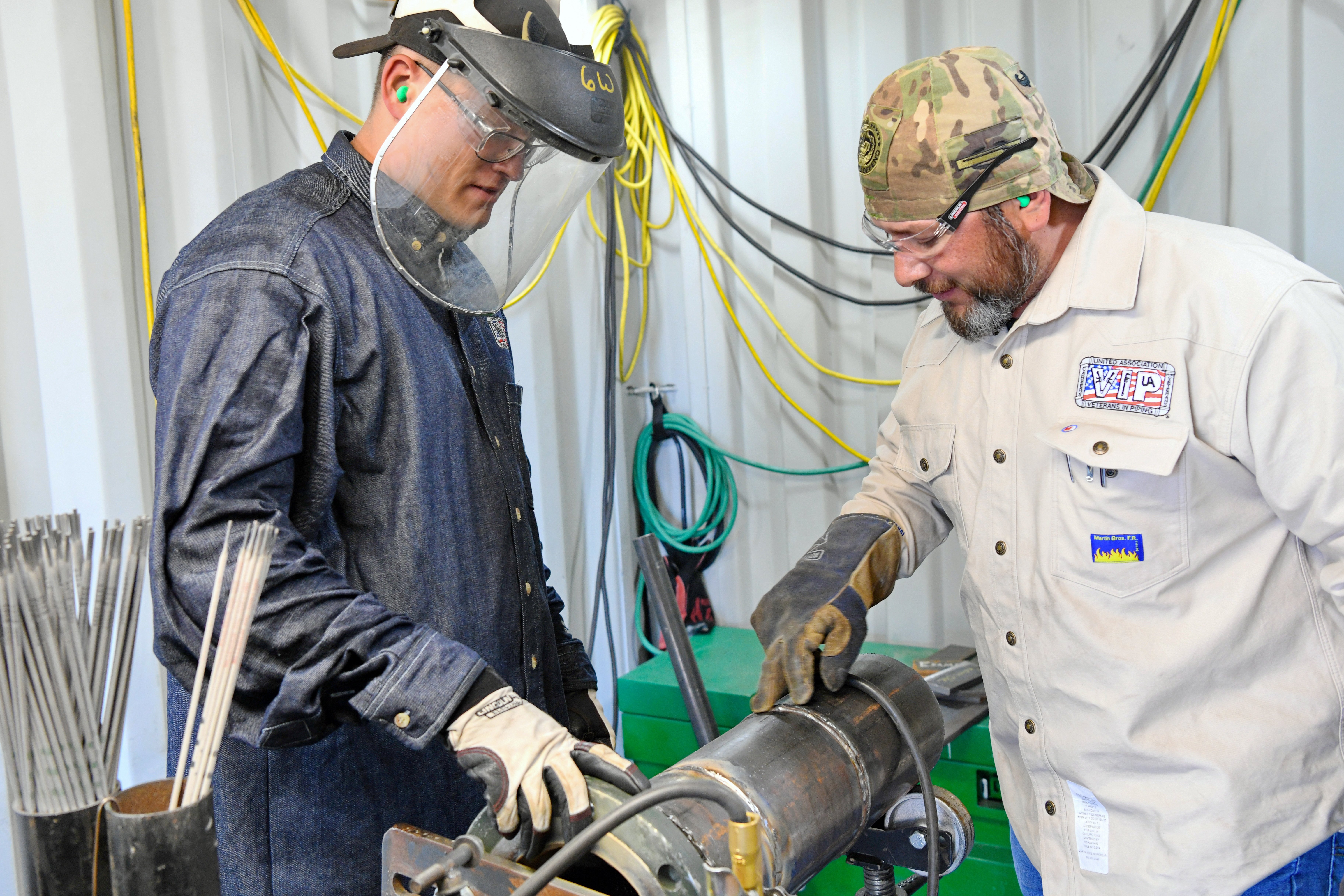 “When I graduated from the program, I wanted to stay in Colorado Springs, so I joined Plumbers, Pipefitters, and HVACR Service Technicians Local 58. What is so great about this program is you have input in where you would like to go. I had great journeymen who mentored me. They made me who I am today. I once had an apprentice who was working above me, and every day, he kept poking the bear. He once said, ‘Ballejo, don’t you ever get mad? You’re always happy,’ and I said, ‘Yeah, I'm happy. I woke up today. I come to a job at which no one is trying to kill me. No one is treating me like crap. No one is looking down on me because they don’t understand what we do in the Army, whether they support us or not. I go home every night and sleep in my bed, and I get to see my wife and kids—yeah, I’m happy every day.’” 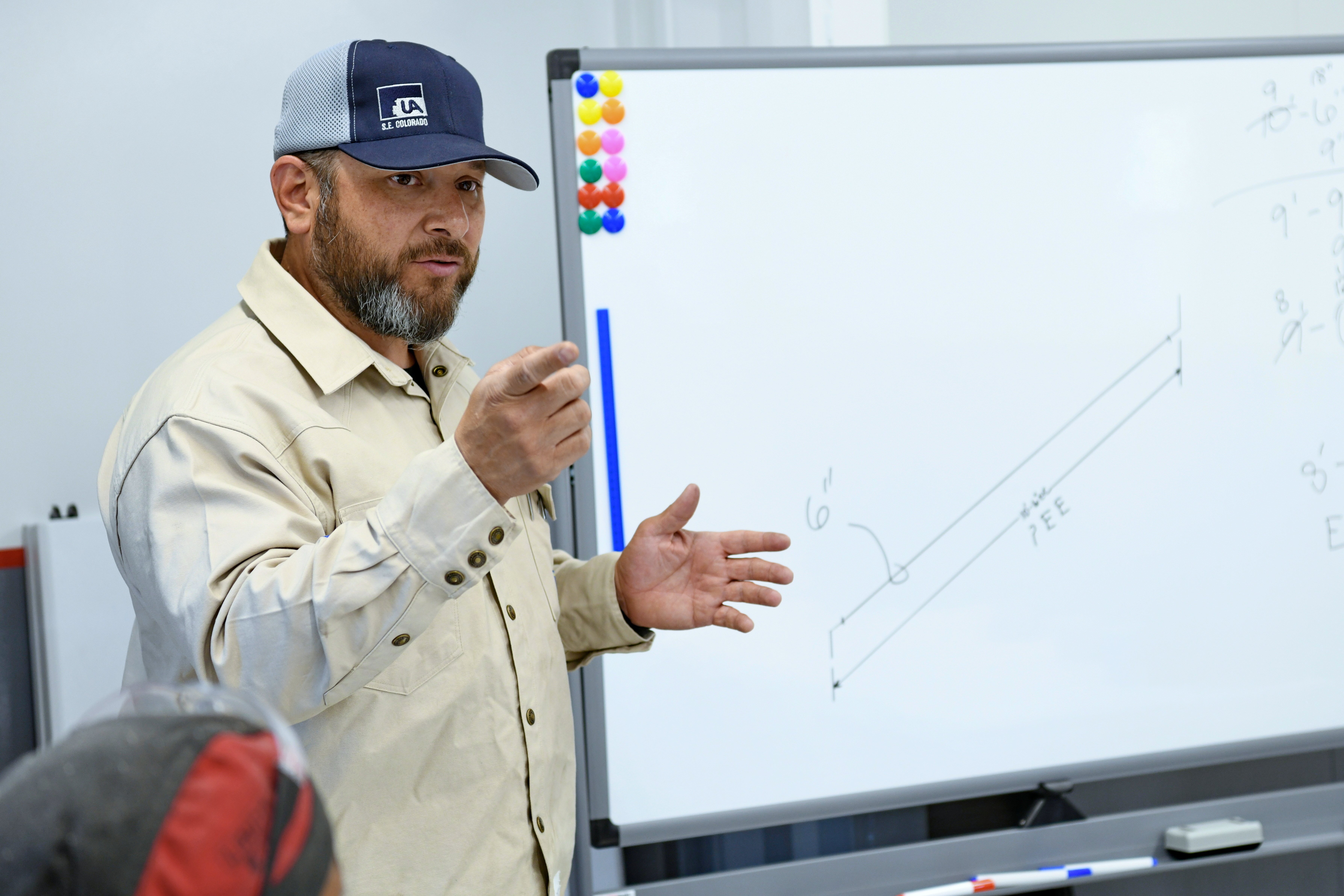 Once Ballejo turned out as a journeyman, he knew he wanted to teach. He had been leading and mentoring individuals since 1997. The following school year, Ballejo taught the apprentices
welding at night.

He told Local 58 Training Coordinator Alberto “Beto” Herrera that he wanted to be a VIP instructor.

The opportunity arose, and Ballejo has been teaching the VIP program for nearly one year, and for him, this has turned out to be his dream job.

Ballejo concluded by saying, “What I tell folks who are interested in the VIP program is, where are you going to find a program that trains you to be a highly skilled craftsperson and you don’t have to spend thousands of dollars for that training. Where else are you going to have the opportunity to start at $18 an hour, get an annual raise, have your medical paid for, can begin saving money with your local union’s annuity program, and have a pension? There are no downsides to this career. The only thing you have to do is complete your apprenticeship.” 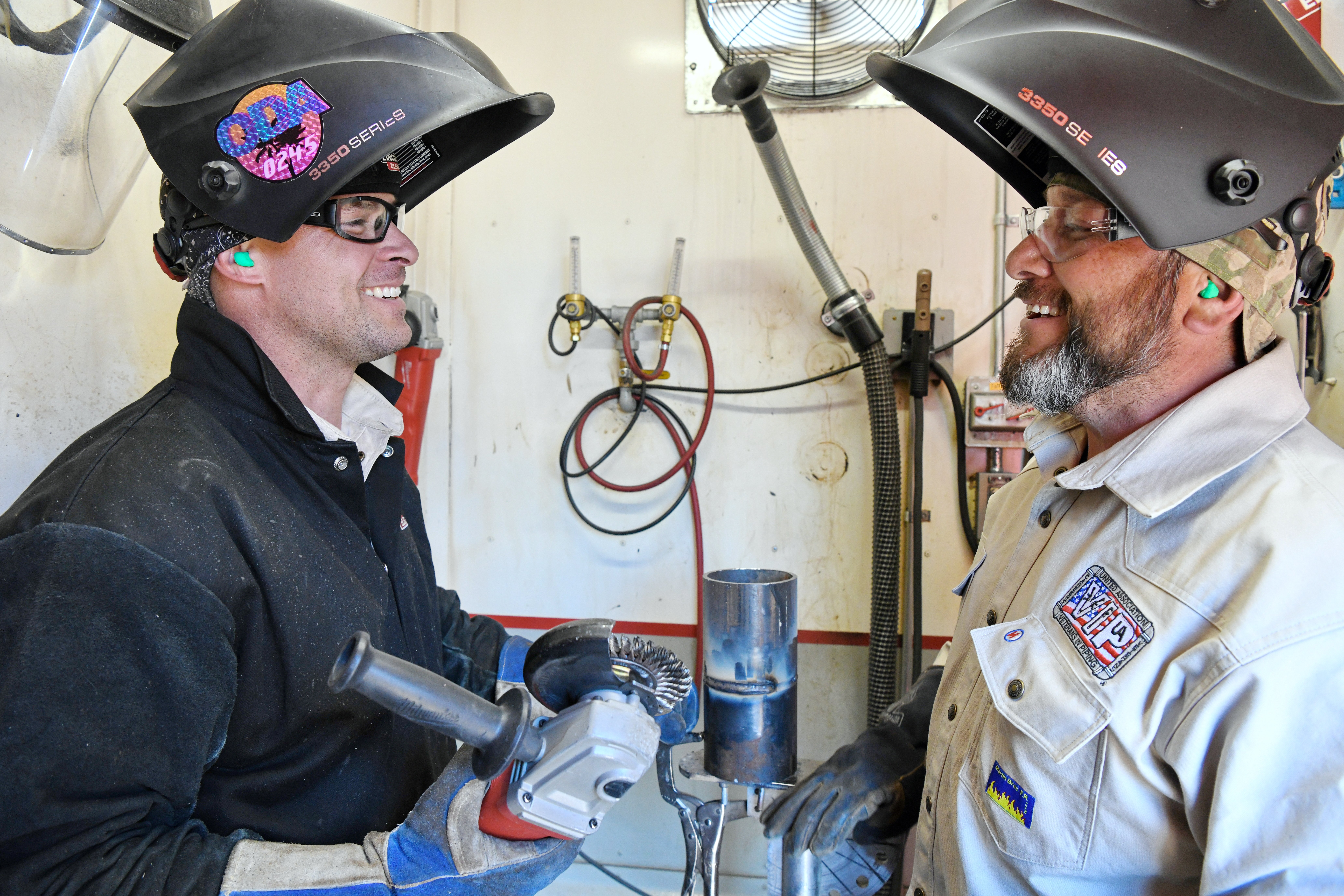